Começar uma wiki
The Truck Driver is a purple swordfish with sideburns. He wears an orange shirt and a green cap.His only line 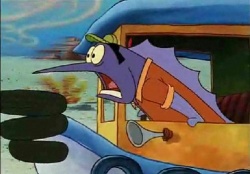 was "Crashin' Frashin' Break Dancers!" He blew his airhorn to make SpongeBob and Squidward move out of the way. Squidward thought that the driver was going to stop, but the driver never did and continued to drive on. Truck Driver is a character that only appeared in the episode
Disponível em "https://wikiesponja.fandom.com/pt-br/wiki/Truck_Drivers?oldid=5387"
O conteúdo da comunidade está disponível sob CC-BY-SA salvo indicação em contrário.